The day I met my grandmother 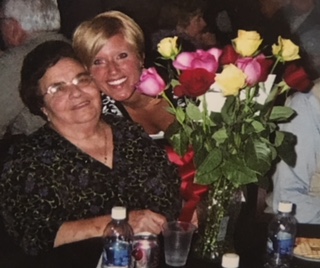 I remember my first trip to Italy very vividly.
It was 1990, the summer after my first year of high school, and the same year my beloved grandfather, the patriarch of our family, passed away.

20+ members of my family ventured to the Motherland.
The oldest in our group was my nana; she was 70, and the youngest was my 18mo. old cousin, Danielle. We were a sight to behold traipsing through the boot-shaped country in our 50-passenger bus. #gobigorgohome

While there are so many fond memories of that trip, one has forever been imprinted in my heart and mind.

My grandmother was born in 1921 and grew up in a very small town on the eastern side of the country. There were less than 600 people in Introdacqua, however it became a hiding place during WWII; the mountains served as a natural barricade from German troops.

My grandmother was forever impacted by the war, often sharing stories of the troops invading the town for food or seeking refuge in the caves carved into the mountainside for protection and defense.

One of my favorite stories that I asked her to tell me on repeat was the one of her wedding dress.

The war brought extreme poverty and lack of provisions so her dress was made from a parachute of one of the soldiers; the dress then rotated among other brides in and around the neighboring towns. Since I was 5-years old, I mentally designed my wedding dress, so I couldn’t imagine not owning my own dress let alone having to share it with others. #spoiled

To say the least, my grandmother was grateful that she escaped the war and the rebuilding of the country in the aftermath. She and my mother journeyed solo to America by boat in 1949 where they joined my grandfather who’d been here working intermittently for several years.

I could go into numerous tangents here bragging about my grandmother’s too-many-to-county-admirable-qualities, but while I had grown up with this amazing woman as my role model and beloved nana, it was during this particular trip when I really met her for the first time.

Wherever we went, I felt like I was with a celebrity.

She walked through the narrow, cobblestone streets waving, hugging, double-cheek kissing, and crying tears of reunion with so many of the fellow townspeople. At 14, I couldn’t understand the magnitude of these greetings. So much had happened in their respective lives since she left her small farmhouse decades ago; while they had similar beginnings, their stories diverged drastically, and they were worlds apart.

While escorting her as if I were her bodyguard, I would often see her reach into her shirt and pull a sweaty $100 bill from her bra (that’s where it’s stored for safekeeping from gypsies, ya know?!) then wad it up and discreetly transfer it into the hand of the person she’d be talking to.

After every person, I would ask in shock, “What are you doing? Why are you giving them that money?”  Guffawed at her generosity, I was calculating all of the souvenirs I wanted to buy with every slip of her hand. #selfish

She would tell me in her hillbilly Italian, “Stai zitto.”
Translation: shut up.

Wrapping up the Carolina DiPaolo town tour and a $1000 later, she finally addressed my ignorance.

She shared that God had blessed her so abundantly and that so many of these people needed it far more than her or me. (My spoiled-brat-self thought, the nerve of her?!) She went on to share that this little bit of money was nothing compared to the blessings she received as a result of a life in America.

That day I was introduced to the truest meanings of love, compassion, generosity, and abundance.

That day I truly met my grandmother, the woman I had received these things from my entire life, but now I witnessed her expressing these lavishly upon others. #humbleservant

I observed.
I learned.
I grew.
I loved her more than ever before.

My nana had many difficult seasons in life and through each of them, she built up strength, like Arnold-Schwarzenegger-strength, y’all. And she developed a rock-solid faith that equipped her to tackle life’s biggest and strongest Goliaths.

Today is the 11th anniversary of my nana’s passing into eternity. Today I celebrate a woman who not only knew God personally, but also represented Him mightily.

My highest hope and prayer is that my family and I can continue the legacy of love, faith, and strength that was made manifest from God through her.

Love you, nana.
Miss you everyday.

Who is someone in your life, sunshine, that you admire and see Jesus’ love made manifest?
Life is precious.
Tell them how much they mean to you today.